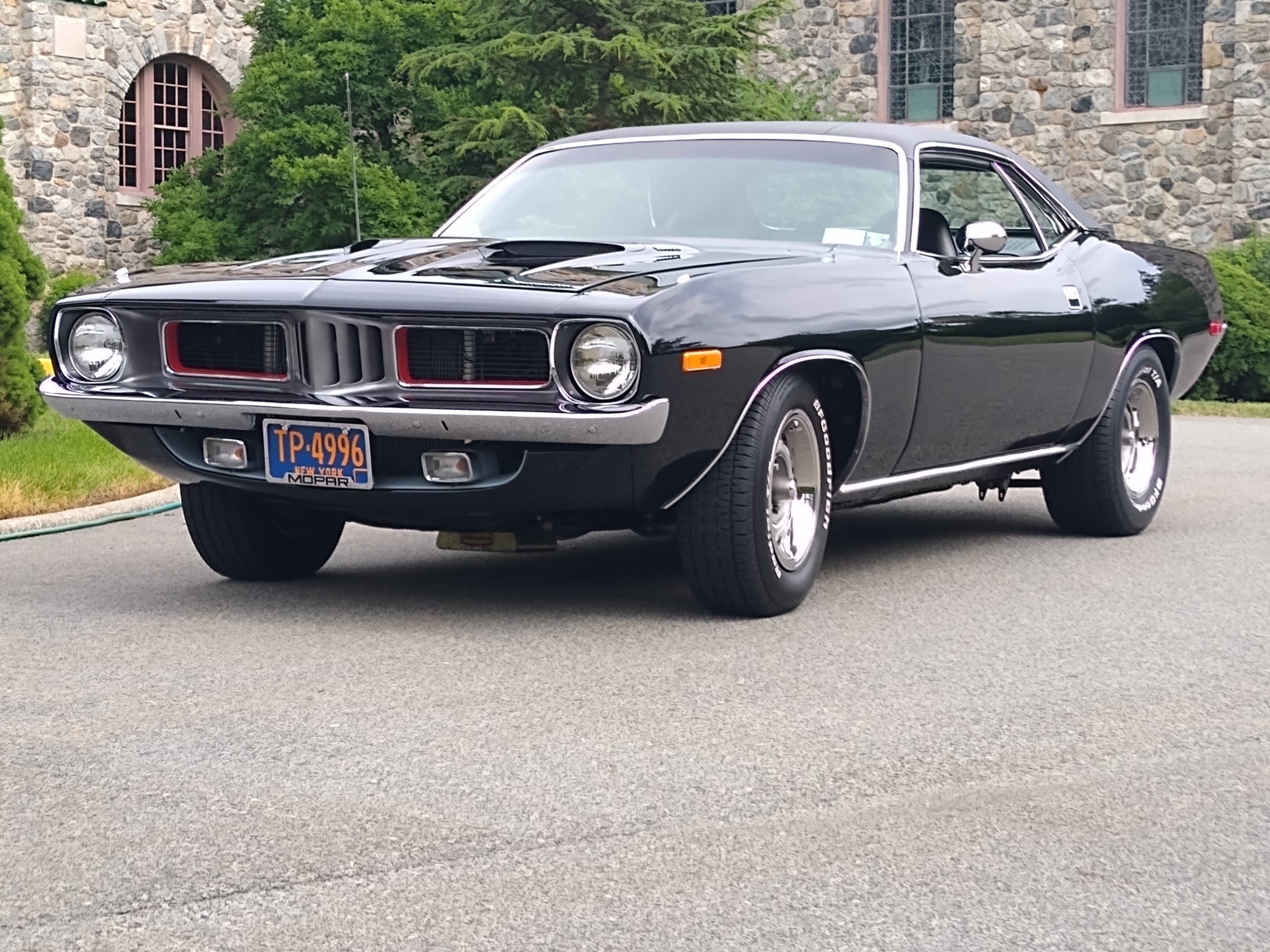 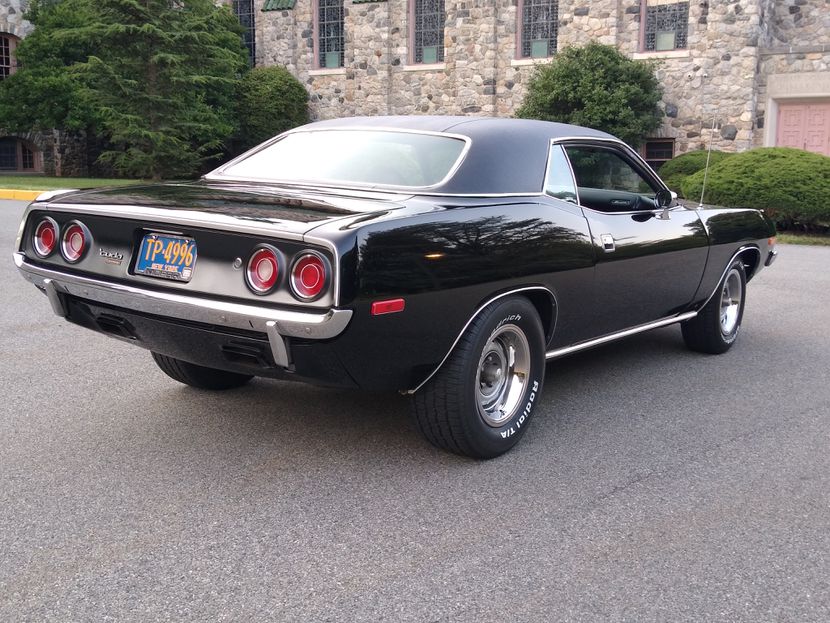 At a glance, this 1972 Plymouth ’Cuda looks like an admirably clean-yet-sedate classic E-body, but under the skin beats the heart of a 496-cu.in. V8 engine, according to the seller. The stroker big-block is backed by a contemporary Tremec five-speed manual gearbox, too, with complementing suspension and brake upgrades including split mono leaf springs, traction bars, and upgraded 11.75-inch front disc brakes. “All of the mechanical and electrical components have been replaced or upgraded over the past five years,” notes the seller, while the rest of the car, including the paintwork and interior, was restored in 2005. 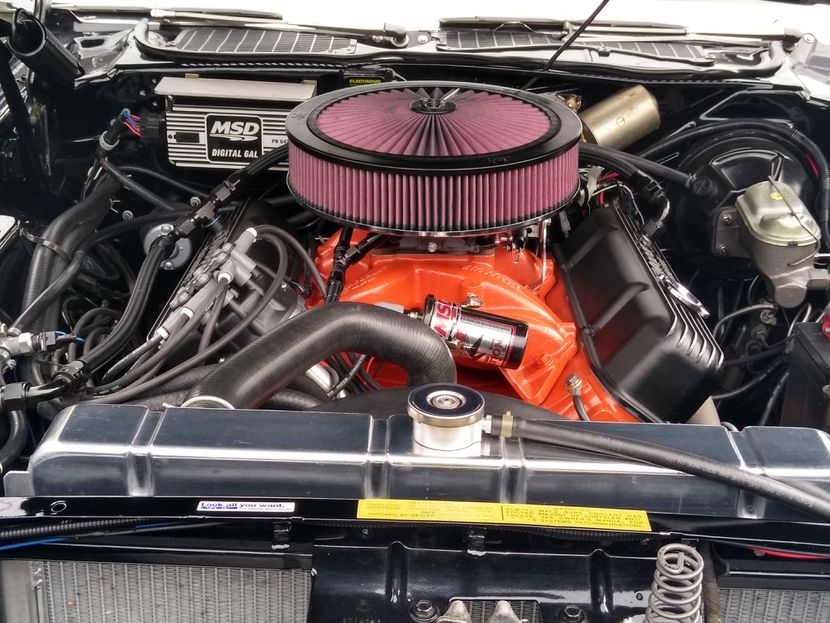 POWERTRAIN
The “H” in this ’Cuda’s VIN indicates it was originally equipped with the high-performance 340 four-barrel engine, and the seller adds it was also a four-speed car. In their place is a “professionally built” 496-cu.in. RB big-block stroker engine and Tremec TKO-600 five-speed manual transmission. The engine has a Holley 950 Ultra XP carburetor, long-tube headers, an MSD ignition system, and more, and according to dyno results from 2021, the engine produces 596 horsepower and 589 lb-ft of torque. The seller says it starts and runs well, but the carb doesn’t have a choke so cold starts require throttle feathering until the temperature comes up. The temperature is kept in check with a FlowKooler water pump and Cold Case aluminum radiator. The transmission is said to shift smoothly and is fitted with a McLeod RST twin-disc clutch. Additional drivetrain elements include a Moser Dana 60 with a rear axle that’s fitted with Moser axle and a 4.10 gearset. This E-body was repainted black prior to the seller’s ownership, and the paintwork was strong enough to win Best Paint in 2016 at a Hemmings Musclepalooza. It is said to remain in very good condition, with some “very minor swirls and blemishes,” according to the seller, who adds the car’s previous bodywork included a replacement trunk pan to eliminate rust. All the glass is reportedly in good condition and the window seals have been replaced, although the rear window is said to need an adjustment. The exterior lighting is also said to be fully functional. A black vinyl cabin in this ’Cuda appears in very good condition and may have been restored prior to the seller’s purchase of the car. There appears to be little apparent wear in the seat covers and carpet, while the door panels, dash pad, center console and headliner also appear in very good condition. The seller notes that all of the interior trim is intact and that all of the gauges in the Rallye instrument cluster are functional. Aftermarket enhancements are limited to a small tachometer (with shift light), a modern Sony radio, and a cupholder next to the center console. That console houses a classic pistol-grip shifter that’s been adapted to the contemporary Tremec transmission. A number of chassis, suspension, and braking upgrades have been made to this ’Cuda, according to the seller, including the additional of subframe connectors designed to stiffen the unitized chassis, Calvert split mono-leaf springs, CalTracs tractions bars, and uprated shocks. In the front, there are Disc-O-Tech 11.75-inch brake rotors and a brake booster. There’s also a silent drive vacuum pump kit. The car rolls on factory Rally wheels, wrapped with BFGoodrich Radial T/A tires. According to the seller, the rear tires are “new,” with only 200 miles on them. The front tires are five years old, with about 3,000 miles under their treads. As New York does not issue titles for vehicles of this age, the seller states that this vehicle will be sold on the proper document in his name for transfer of ownership. Additional documentation for this 1972 Plymouth ’Cuda includes parts receipts, as well as the dyno sheet showing the engine producing nearly 600 horsepower. The seller also notes the original, numbers-matching four-speed transmission is included with the car. It’s a classic-looking E-body with modern performance enhancements — and one that appears to look as good as it runs.