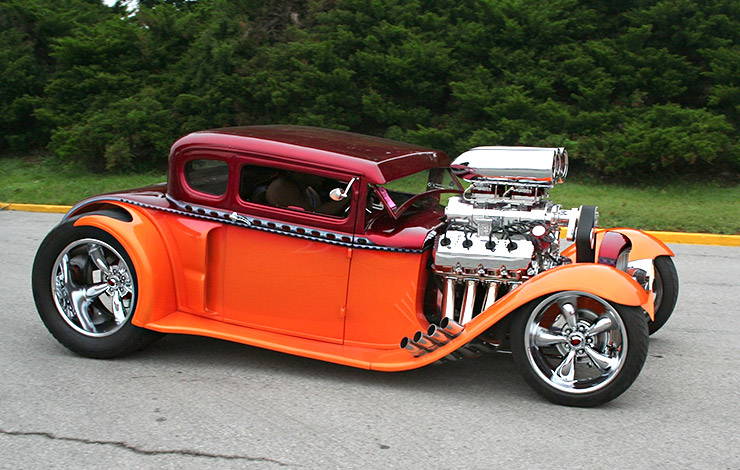 Everything is crazy in this unusual, blazingly tuned and glowing 1930 Ford Model A coupe named “ABSURD”.

At first glance, the Hot Rod looks more like a Hot Wheels car then a traditional hot rod, its flamboyant, colorful, it has personality and it has a childlike presence to it but not in a bad way. In a good way like Radical Rod was built straight out of a child’s imagination of dreaming big and having a real version of your favorite hot wheels car. This car built on childhood dreams and imagination is Bruce Harvey’s 1930 Ford Model A Hot Rod nicknamed “ABSURD”. It’s a Hot Rod, it’s a Street Rod, in other words, it’s a Radical Rod.

The Idea for “ABSURD” came when Bruce was at a car show in Pittsburgh and he saw an old neglected 1930 Ford A coupe and he knows he could turn into a special one of a kind Hot Rod with the only limit being his Imagination. When Bruce started with Radical Rod he originally built as a Silver Rat Rod called Ratical Rod (how original) but then he kept getting new Ideas and started changing the car more and more.
–

Soon the car was Radical Rod with its two-tone Red and Orange paint job, it’s one of a kind, cut rear fenders, the Body is chopped 4” and channeled and sectioned 8” and is 8” wider. “ABSURD” Radical Rod is a car built by Imagination, blood, sweat, and tears. It’s the kind of car that reminds us of when we were young when we use to dream of having a real version of our hot wheels car. It’s that car made of dreams.