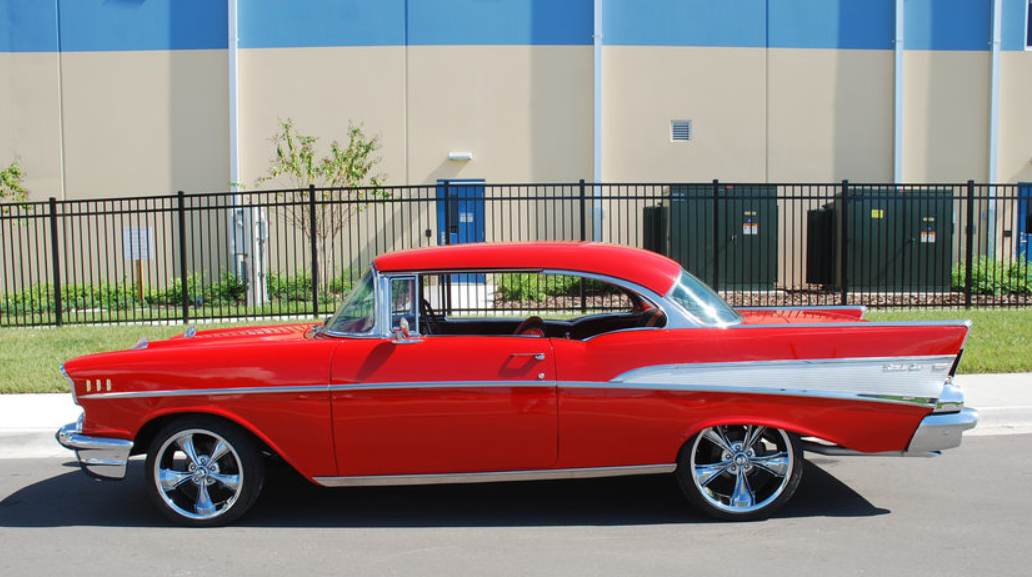 Jimmy Dybo is a Chevy enthusiast and owned quite a few classics like ’71 Chevelle, ’70 Monte Carlo and a couple of Novas, but his favourite always has been the Bel Air.

He was encouraged by his wife to get one for years and finally the wait was over in 2013.

In January of 2013 Jimmy purchased the ’57 Chevy from a dealership in Grand Rapids, Michigan.

He saw only the pictures online the dealer informed him it was a salvageable title car, which was in Indiana, then Florida and Michigan, but the Bel Air was restored in the 90’s, it looked pretty good and what was most important it was painted in Chevy Orange, that Jimmy loved the most of all colors so he brought the classic car home in Brooklyn, NY.

“I love all the chrome and stainless steel trim, it gives it a lot of character. It’s tough to clean, but I don’t mind, it’s worth it. What I love the most about this car is the iconic fins, they are just awesome. I feel like a movie star when I drive my ’57 Chevy around as everybody gives me thumbs up or wants to talk to me about the car, and of course it makes me feel good that people appreciate the Bel Air as much as I do.”

When the man acquired the 1957 Chevy Bel Air, it had a 396 Big block mounted to 700R automatic with B&M shifter on the floor. He decided to swap it with the small block 350 ZZ6 engine since you get similar horsepower and torque without the extra weight and heat the big box produces.

With the coated Hooker headers and Dual 2.5 inch Flowmaster 40-series exhaust system, Jimmy estimates the 350 ZZ6 engine at a little over 400hp. The power is now transferred through Tremec TKO-600 5-speed manual transmission with Centerforce clutch assembly and Hurst shifter with a white shift pattern knob. The rear end is a 12-bolt posi with 3.73 gears.

The vehicle relies on power assisted front disc brakes and rear drum brakes for stopping and has manual steering.

The classic car stereo kit looks like an old radio but with today’s technology, but fits perfectly , so no cutting up the dash is required and the same goes for the speakers built in the original kick panels.

“My Orange ’57 Chevy  won multiple trophies at car shows throughout the N.Y.C. area over the years, but she is not a trailer queen. When I have a nice straight section of road, I drive it like I stole it.”