You want a turnkey car that turns heads without turning you anxious over having to do a boatload of modifications all by yourself? Look right here at this unforgettable sports station wagon from Chevrolet. This 1956 Chevrolet Nomad, one of 7,886 produced that year, was modified into a street cruiser more than a decade ago. While some of the build’s details have been lost due to the passage of time, it’s still said to show off solidly. With a modern Chevrolet crate engine beneath its hood, this Nomad now has the swagger to match its style. Added attractions include a complement of Dakota Digital gauges and an aftermarket air-conditioning system that is said to be fully functional. The Nomad is said to run and drive with no issues. 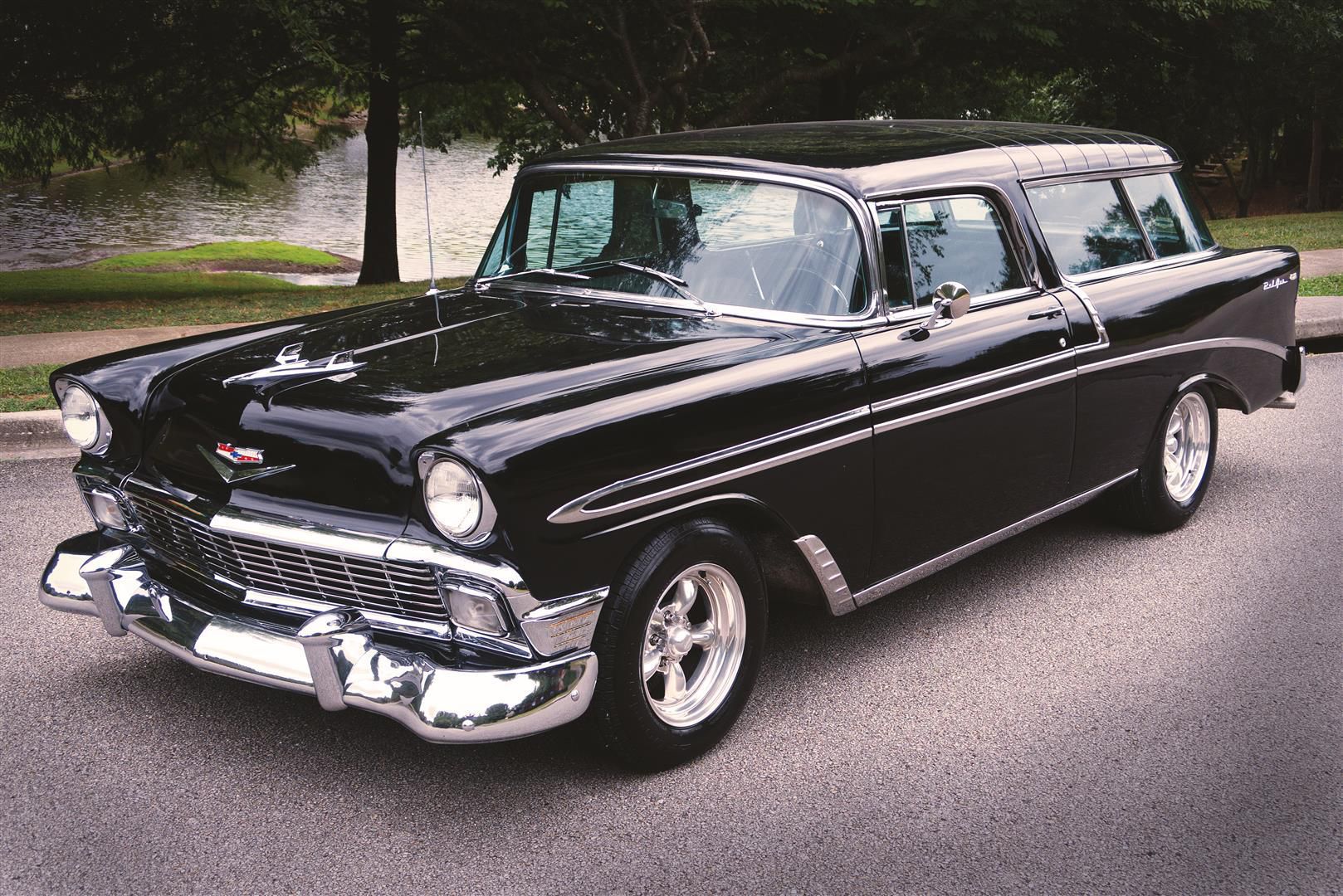 POWERTRAIN
The seller doesn’t know the date of the transplant but believes that at some point at least 10 years ago, an aftermarket GM 383-cubic-inch small-block performance V-8 was installed. Its horsepower rating is unknown, but the 383 boasts matte-black rocker covers and a triangular air filter housing. The engine is fed by a four-barrel carburetor atop an aluminum intake manifold. An electric fan assists the radiator, and coolant is supplied to the engine via a chromed flex pipe. Another dress-up item is the polished air-conditioner compressor and pulley drive. The engine is said to start immediately and run with no smoke.

The engine turns a GM 700R4 four-speed automatic transmission that is reported to change gears without issues. No fluid leaks are reported from the powertrain. Light corrosion is noted on the radiator tank, exhaust manifolds and the brake master-cylinder reservoir. 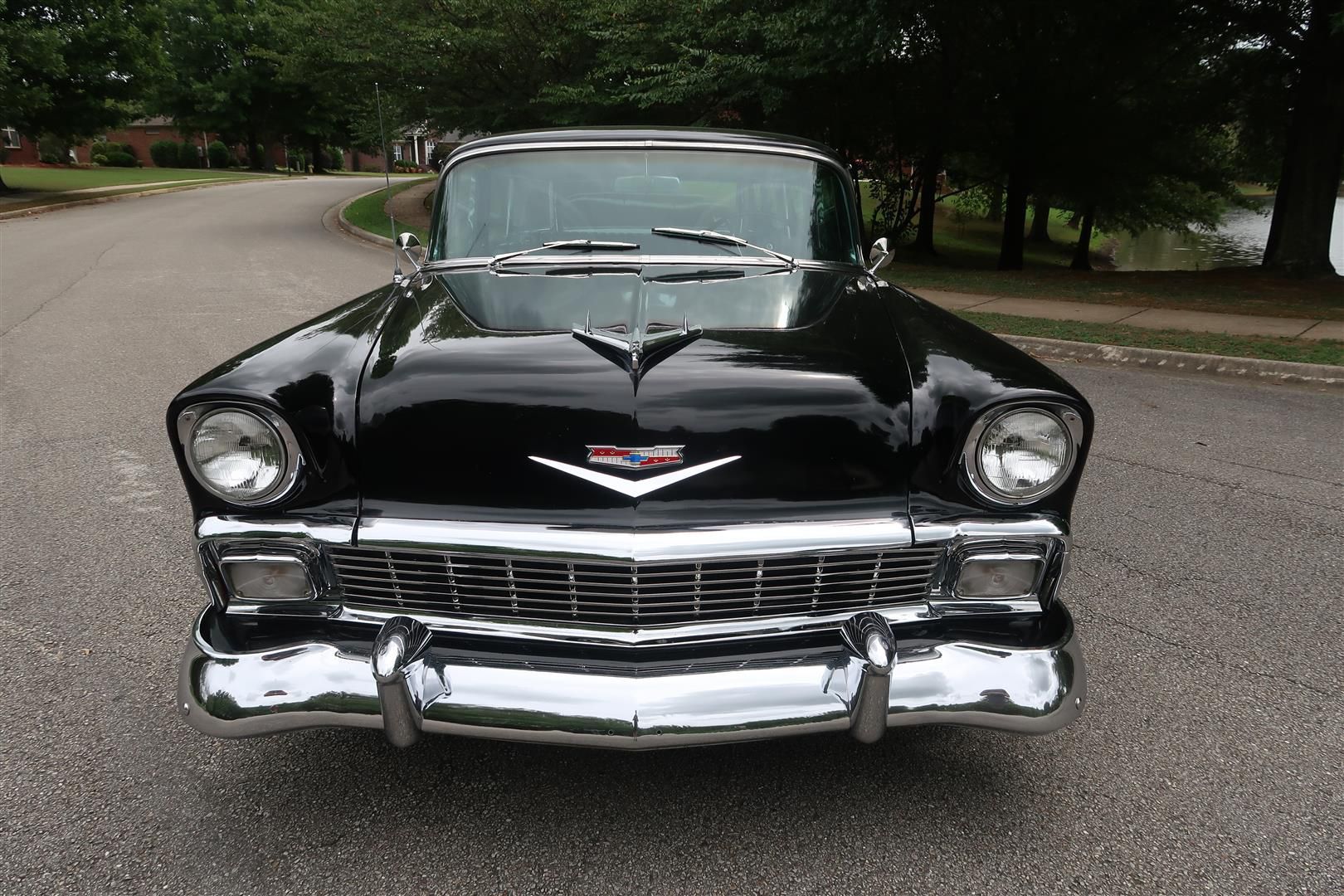 EXTERIOR
The seller describes this Nomad as now being of driver quality, with a finish that’s estimated to be 12 to 15 years old. In the seller’s estimation, the car still presents well, but the finish is clearly showing its age. The black paint is described as being in decent condition, with imperfections visible in several areas. Chips are reported on the drip rails along the roofline. Other chipped locations are reported, and rust is now bubbling up through the chrome on the passenger side of the front bumper. Other rust bubbling is reported on the tailgate, where evidence of body filler can also be seen. Photos of the Nomad’s underside reveal dirt and grease in several areas; surface rust can be seen on the frame rails, lower body panels and differential housing, among other spots. The chrome trim, including the side and tailgate moldings, appears to be in good condition. The seller describes the car’s glass as being in overall good condition. The windshield has some rock chips and spiderwebbing, while the side glass shows some bubbling at the corners, indicating those pieces may be original to the car. All the exterior lighting is reported to work properly. 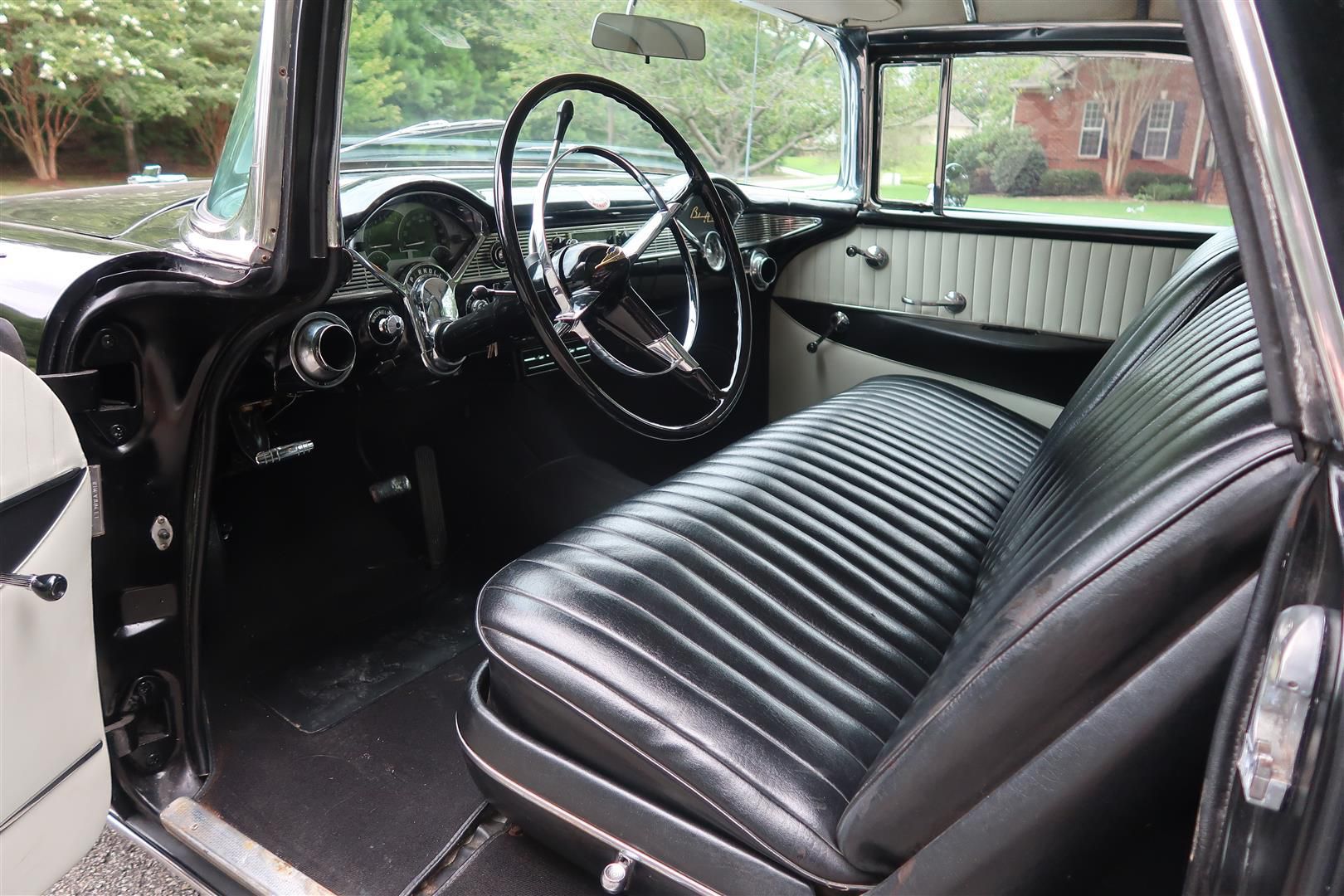 INTERIOR
The seller says that the vinyl seat and interior door facings are in excellent condition. No rips or tears can be seen. The carpeting is also reported to also be in excellent condition. The headliner is sag-free and appears to be include its original full-width retainer moldings, but is age-discolored in several locations. The interior trim and small controls are fully present and look to be in very good shape. So does the aluminized full-width dashboard insert that includes the signature dual nacelles of the ‘56 Chevrolet line. The factory instrument bezel is now fitted with a functional 1956-specific VHX gauge package from Dakota Digital that includes a digital clock and odometer. The interior retains its column shift. The dash includes controls for the Vintage Air setup, whose outlets are underneath. The cargo area is undamaged and presents cleanly. An aftermarket digital radio occupies the opening in the dash, and is wired to the single dash speaker. CHASSIS
The seller states that this Nomad runs and drives well. As part of its transformation, the Nomad was fitted with power brakes, including front discs, which are said to be free of leaks and in perfect working order. The Nomad also has power steering, which is said to track straight and be similarly free of leaks. The extent of further chassis and suspension modifications, as well as their conditions, remain presently unknown, although the seller says no problems have been noted. American Racing polished spoked wheels, in good condition, mount BFGoodrich radials that are several years old, but said to still have plenty of tread remaining.

This iconic sport wagon has spent at least a decade in northern Alabama and includes a current registration. This 1956 Chevrolet Nomad has a way to go to reach show quality, but it’s mechanicals appear solid and the car looks ready for immediate use and enjoyment or as a solid stepping off point to show car.