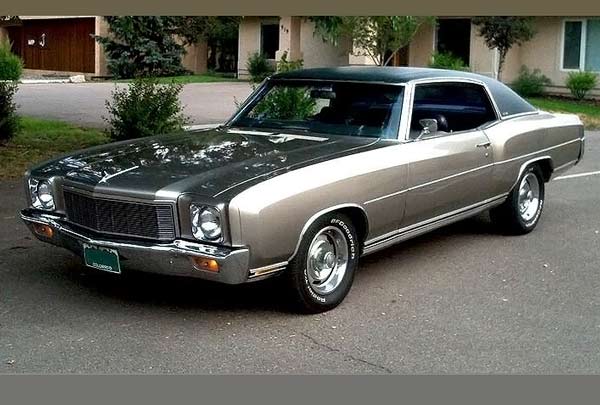 Check out this beautiful 1970 Chevrolet Monte Carlo! This car has been in possession of the previous owner for the last 13 years. Always kept in a climate controlled, covered and enclosed environment. This car is fully documented with all of its original documentation including its Original Build Sheet and purchase invoices from when it was bought new. Built on the same chassis as the A-platform Chevelle models, this big-block example from the first year of production is stylishly resonant in its original color of Cortez Silver that has been re-painted with a gorgeous straight shine, with a conservative black vinyl top and interior. The restoration started with a solid rust free survivor and we believe this Monte Carlo to retain all of its original metal. Marketed by Chevrolet as “a car without pretense,” the Monte Carlo used cues evident in both Cadillac and Pontiac releases of the time. The clean design gave the marque a vehicle somewhat less bulky than the Caprice and Impala with an appeal to a more sophisticated buyer than Chevelle might garner. Its popularity was proven by 145,000 units sold that year, with only 7,456 sold with the 402/330 HP engine this car has. This powerplant featured the basic 396ci architecture and still used that displacement in the factory literature, with a greater bore diameter, a 4-barrel carburetor, chrome-plated air-cleaner cover and dual exhaust. A sporty model, though not in SS trim (reserved only for 454 models that year), this car has an automatic transmission with horseshoe-handle floor shift and a 12-bolt rear end. Driving is further enhanced thanks to power steering and power brakes with front discs. Once inside the vinyl interior, the sense of upscale appointment is enhanced, as this car received wide Strato-Bucket seats and optional center console, Four Seasons factory air conditioning, power windows, tinted glass, pushbutton radio and wood-grain dash and console appliqués. Indeed, many buyers cited the car’s styling as a major part of selecting this model, with its clean grille treatment, lack of “gaudy baubles,” as the factory literature stated, rocker-area trim from front to rear, and as optioned here, with dual chrome outside mirrors. The metallic-appearing finish and subdued color creates a sense of solid Detroit power and value, and this car will certainly be enjoyable for both show use and driving enjoyment.